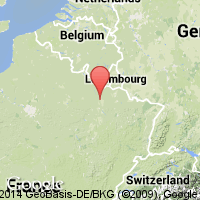 . . . We have returned to the wide open view that I love so much. Unfortunately we can only catch a glimpse of it through mouse-holes. Well, it is always so!. . .

. . . All these days I have been feeling the charm of a country lying in autumn sweetness. This peace was troubled yesterday by the poignant sight of a burning village. It is not the first we have seen, and yet we have not grown used to it.

We had taken up our observation-posts; it was still dark. From our height we saw the tremendous flare and, at daybreak, the charming village, sheltering in the valley, was nothing but smoke. This, in the silvery nimbus of a glorious morning.

From our mouse-trap we had looked to the distance with its prettily winding road, its willow-bordered stream, its Calvary: all this harmony to end in the horror of destruction.

The Germans had set fire to it by hand in the night; they had been dislodged from it after two nights of fierce fighting: their action may be interpreted as an intention to retreat at this point. This proceeding, generally detested by our soldiers, is, I think, forced by strategic necessity. When a village is destroyed it is very difficult for us in the rear to make any kind of use of it. All day [Pg 69]we have been witnessing this devastation, while above our heads the little field-mice are taking advantage of the straw in which we are to sleep.

Our existence, as infantry, is a little like that of rabbits in the shooting season. The more knowing of us, at any rate, are perpetually on the look-out for a hole. As soon as we are buried in it, we are ordered not to move again. These wise orders are unfortunately not always given with discrimination; thus, yesterday there were four of us in an advance-trench situated in a magnificent spot and perfectly hidden beneath leaves. We should have been able to delight in the landscape but for the good corporal, who was afraid to allow us even a little enjoyment of life. Later the artillery came up with a tremendous din and showed us the use of these superlative precautions.

None the less, I have been able to enjoy the landscape—alas! a scene of smoke and tragedy yesterday. Be sure, beloved mother, that I do not wish to commit a single imprudence, but certainly this war is the triumph of Fate, of Providence and Destiny.

I pray ardently to deserve the grace of return, but apart from a few moments of only human impatience, I can say that the greater part of my being is given up to resignation.