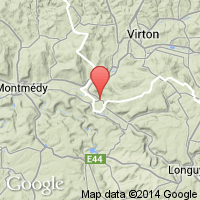 This morning they let us sleep until past eight o’clock. After getting up we at once led our horses down to the big stone trough in the middle of the village. The church bells were ringing. So there were still Sundays! Somehow that seemed strange! I was still sleepy and my numbed limbs ached abominably, so that it was torture to get into the saddle. How I longed for a day’s rest!

As I was returning to the camp, Deprez at my side, we met Mademoiselle Aline, in a light pink dress of flowery pattern, and very daintily shod. She was doubtless going to Mass. She recognized us and waved her hand, smiling. At the camp we found them waiting for us.

“What? Are we going into action again?”

The two batteries now forming the Group, our own and the 12th (the 10th had been taken by the enemy in the Gueville woods), started off along the Virton road. It seemed that we were never to get a moment’s respite.

But almost immediately we halted in double column on the grass by the side of the road. On the hill-side were strong forces of French artillery in position, the motionless batteries showing up like black squares on the green slope.

The roll was called. One or two were missing from my battery. Baton, the centre driver of the gun-team, had been wounded in the head, and had been left behind in the hospital at Torgny. Hubert, our gun-commander, had disappeared, and so had Homo, another of the drivers. The last time that I had seen Homo he was wandering across a field swept by the German guns, a wild look in his eyes.

Lucas, the Captain’s cyclist, was also missing, and this worried me especially. He is always so cheerful, open-hearted, and amusing, and is
one of my best friends.

There was no news at all of our entire first line, conducted by Lieutenant Couturier. Standing in a circle round the Captain the detachments were reorganized. The battery had only three guns left, and it was necessary to send to the rear the one with the broken hydraulic buffer.

How tired I was! As soon as I stayed still I began to fall asleep.

Hutin opened a box of bully-beef for the two of us.

“Not a bit. . . . And yet I’ve not eaten anything since the day before yesterday!”

“Same here. Do you think we shall have any more fighting today?”

“They don’t seem to have taken advantage of their victory yesterday in order to advance.”

“Well,” said our gun-layer, ” in my opinion we’ve fallen into an ambuscade. They were waiting for us there, and they had got all the ridges nicely registered. That’s how they had us! But all that will change!”

We each ate without much relish four mouthfuls of bully-beef and shut the box again. Besides, the column was already beginning to move. Striking across country we reached Lamorteau, a large village on the banks of the Chiers, where we encamped near the river and waited for orders.

The scene was soon brightened by smoke rising straight up in the still air of the morning, which was already hot. The men made their soup and the drivers went off to draw water for the horses, which were not unharnessed.

Suddenly, on the bridge spanning the Chiers, Lieutenant Couturier appeared at the head of his column, accompanied by Lucas. The latter ran up to me.

“You devil! You did give us a fright!”

We grasped each other’s hands, and that was all. But I felt immensely relieved.

Hubert was also with them. Conversation became lively round the camp-kettles, in which the soup was already steaming. Afterwards, no orders having arrived, we slept, and at nightfall returned to Torgny to camp there once more.

The Major ordered the horses to be unharnessed and, supposing therefore that no danger threatened, I stretched myself and gave a yawn of satisfaction. Then we bivouacked. What work! The guns are placed about twenty yards apart. Between the wheels of two guns are stretched the picket lines, and, when the horses have been tethered to them, and the harness arranged on the limber draught-poles, the park ought to form a regular square.

We took off our vests, for it was still hot. Deprez was distributing oats among the drivers who stood holding out the nosebags.

Somebody suddenly cried out:

Right overhead, like a big black hawk with a forked tail, an aeroplane was circling round and round. There was an immediate rush for rifles. Lying on their backs in order to shoulder their guns, and half undressed, their open shirts showing hairy chests, the men opened a brisk fire on the German bird of prey, which was flying low. The startled horses neighed, reared, and pulled this way and that, many breaking loose and galloping off across the fields. The aeroplane seemed to be in difficulties.

The men still continued firing, although the machine had been out of range for some minutes.

“Here, you aren’t in a bigger hurry than any one else!”

” All you chaps have got to clear off! No time for amusement, this, you know; the Germans are coming up. There’ll be some more fun in a minute!”

He spurred forward, and we hurried back to our guns. Was it a surprise? We limbered up at full speed, and before we had even had time to button our shirts the first gun left the park.

We had thrown the nosebags, still half full of oats, on the ammunition wagons and gun-carriages, and once on the way it was necessary to lash them so that they should not be shaken off. Hastily throwing on their clothing, the men jumped on to the limbers as best they could, while the battery moved forward at a brisk pace on the uneven road.

We kept continually looking over our shoulders, towards the hills on the east dominated by Torgny, from which direction we expected to see the heads of the enemy’s column emerge at any minute. I momentarily awaited the crackling of a machine-gun or the scream of a shell.

The road in the distance, as it wound through the valley, was black with horses and ammunition wagons advancing at a trot and raising thick clouds of dust. Batteries were also to be seen rolling across country. What was the meaning of this sudden retreat?

The whole day long we had only heard the guns from far off, towards the north. We had now even ceased to hear them altogether. Had we been surprised, then, or nearly surprised? But one never knows what has really happened on such occasions!

We took up our position on the ridge between the Chiers and the Othain, where the whole country, its contours and colours continually changing in the bright sunshine, had seemed to smile at us upon our arrival. It seemed to me as though the memories awakened by the majesty and stillness of the scene were deeply rooted in the past. I felt as though I had aged ten years in one day — a strange and painful impression.

Our guns were pointing towards Torgny and the plateau above it. At any moment the order might come to bombard the unfortunate village. Possibly, even, a shell from my gun might blow to bits the very house which had given us shelter, and kill the woman whose hospitality had meant so much to us! That was an awful thought! Oh, this ghastly war!

But night fell, and as yet the Captain had seen no signs of movement on the plateau. Behind us the narrow valley of the Othain was slowly becoming shrouded in shadows. The limbers were stationed 200 yards from the battery. All fires were forbidden — even lanterns might not be lit, as our safety on the morrow might depend upon our remaining undiscovered. The night was clear, but a thin mist partially veiled the light of the stars, and there was no moon. Motionless, and clustered together in dark groups, the horses quietly munched their oats. A far-
reaching reddish glow lit up the eastern horizon — doubtless La Malmaison on fire — and as the darkness deepened other lights appeared
on the right and left of the main conflagration.

On every side the villages were burning. Against the fiery sky the haunches of the horses, their heads and twitching ears, and the heavy masses of the guns and limbers stood out like silhouettes.

Standing side by side with our arms folded, Hutin and I watched the flaming countryside.

“Oh, the brutes, the savages!”

And we both lapsed into silence, struck dumb by the same feeling of futile horror, and filled with the same rage. I saw a yellow gleam pass across the dark eyes of my friend — a reflection of the holocaust.

We threw ourselves down on the straw heaped up behind the guns. A searchlight from Verdun swept the country at regular intervals, and the inky sky was lit up by the visual signalling. Huddled together we gradually fell asleep, a single sentry, wrapped in his cloak, standing motionless on guard.