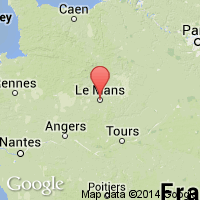 Yesterday evening at nine o’clock, by way of a purely theoretical roll-call, the Lieutenant opened the door of our den.

“Every one all right in there?”

This morning Pelletier, the trumpeter, a Parisian who seems able to turn his hands to almost anything, began sharpening our swords. Standing in front of a bench in his shirt-sleeves, he worked an enormous file with a horrible screeching noise which sent cold shudders down one’s spine and set one’s teeth on edge. From time to time he paused in his work, and, with furious thrusts and slashes, tried the points and edges by cutting up some old deal cases lying in a corner.

From the depths of our quarters, where we live in an atmosphere alive with the most ridiculous rumours, waiting for orders to entrain, the tumult of the general mobilization in the streets and on the neighbouring Paris-Brest railway Hne sounds like incessantly reverberating thunder in an atmosphere charged with electricity.

One of my fellow-countrymen, Gaget, who is clerk to the Artillery Staff, told me that war has not yet been declared. He is in a position to know. His mother has written to him from Mayenne saying that my family believe me to be already at Verdun. I wonder if my letters are not being delivered. . . .

This afternoon Deprez went to the laundry to get his washing. In the shop a young woman, the wife of a corporal of artillery who joined the colours this morning, threw her arms round his neck and began to cry.

He came back much upset.

Some of the men have gone with their horses to bring back our war material from the station. The park is arranged on the wide footpath of the Avenue de Pontlieue, where the plane-trees shelter our 75 mm. guns and ammunition wagons. Women stop to look at them, and some shake their heads despondently.

It appears that we are to entrain tomorrow evening. We are beginning to get thoroughly bored here, and do not know how to fill in our time. I am going to get some sleep in our den at the farther end of the kitchen garden, where it is cool and shady. The sun, through the open door, only lights up a large rectangle of straw, covered with haversacks and gleaming weapons. The weather has been splendid to-day, fine and clear, and, now that twilight is near, the air is beginning to hum with those midges which fly round and round in circles and are supposed to herald fine weather.

I was able to get out for a moment. Some women, their eyes swollen with crying, looked at us with pity, and spoke to us — the first young men to go — in voices full of sympathy:

“When do you start?”

“To-morrow — perhaps the day after.”

“We’re not sure — either Verdun or Maubeuge.”

Good luck ! . . . I hope so ! . . . It is a sort of lasting farewell they bid us, out of the fullness of their hearts, before we start for the Great Unknown.